nickPosted on March 3, 2012 Posted in Uncategorized — No Comments ↓ 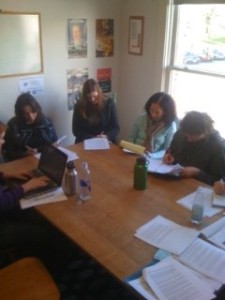 I taught a writing class at Seattle’s Hugo House today entitled, WRITING COMPELLING CHARACTER SKETCHES. Strong characters are the heart and soul of every great story, whether fiction or nonfiction. A character sketch introduces the main figures in your story and makes readers care about them.

Strong characters are the heart and soul of every great story, whether fiction or nonfiction. To make your story compelling, you have to ensure that readers care about your characters. Even a topic as seemingly dull and unpromising as Great Basin geology can enchant readers if the story comes through someone who cares deeply about it. This is exactly the strategy John McPhee employs in his book, Basin and Range. McPhee is a writer interested in everything: the Merchant Marine, Russian Art, the Swiss Army, the cultivation of oranges, the building of birch bark canoes, the collection and consumption of road kills. Yet he doesn’t assume a similar level of interest from his readers. Instead he courts them by seeking colorful individuals through whom he tells the story and so entices readers into the subject. In Basin and Range, he chose the geologist Kenneth Deffeyes.

“Deffeyes is a big man with a tenured waistline. His hair flies behind him like Ludwig van Beethhoven’s. He lectures in sneakers. His voice is syllabic, elocutionary, operatic. He has been described by a colleague as ‘an intellectual roving shortstop, with more ideas per square meter than anyone else in the department–they just tumble out.'”

The class participants had a chance to draft some sketches, mainly of their protagonists and antagonists. It was a great opportunity for them to get some writing down and an opportunity for me to contribute to the Hugo House, a vital part of Seattle’s writing community. Here’s a comment from one of the students:

I just wanted to reach out and thank you for today’s class. I didn’t get very much written, but that’s the fickleness of inspiration. What’s more important is that the foundation was laid and I walked away with concrete, applicable tools with which to harness the abstractness of thought.

And I did get a little written: “His smile was wicked. His eyes flickered with intention. And yet he had a forgettable figure: thinning, limp brown hair; pale elbows that broke into hives from too much sun; hazel eyes that turned grey under the Seattle sky; thick, brown-rimmed glasses; and a slightly discernible belly. All of which hinted at his potential to settle.” Your class got me thinking of how to recycle the cloud of ideas that I’ve been juggling (trying to write a screenplay) into other works so that the “voices” that do not fit in my screenplay will be satisfied to find themselves heard!

I already have a trip planned to Switzerland this spring but would love to hear of other travel writing opportunities. What is the best way to stay aware of the offerings?