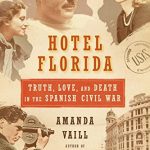 In my travel writing classes, I like to emphasize how using scenes and concrete detail can make a place come to life as Ernest Hemingway did in A Moveable Feast and other works. I recently returned from teaching the Travel, Food and Wine Writing class in Spain and while there, took a tour of Hemingway’s Madrid which provided a fascinating look at his time there. The visit inspired me to read, Hotel Florida, by Amanda Vaill, a fascinating account of the intertwined lives of Hemingway, Martha Gellhorn, Robert Capa, Gerda Taro and others who went to Spain to capture the stories and images of this horrific conflict which served as a precursor to World War II.

The book begins in 1936 with a scene of Franco boarding a plane in the Canary Islands for Spanish Morocco to lead his troups onto the mainland of Spain in a carefully planned military coup against the democratically elected Socialist Government. So began the Spanish Civil war, a conflict that tore apart the country and helped touch off a global conflict. There have been many books and histories about the war, but Vaill breaks new ground in using six true to life characters–Hemingway and others–to tell her story. This gives the book a freshness that’s appealing. Hemingway found in the conflict a way to boost his writing career as his experience as a war correspondent helped provide the material of For Whom the Bell Tolls, a novel that confirmed and expanded his reputation. He also fell in love with Martha Gellhorn, an ambitious and extremely attractive young journalist who became his third wife. The book chronicles their blossoming romance amid the bombs, shells, atrocities, and excitement of this important conflict, illuminating the lives of Hemingway and others who told the story of the war.