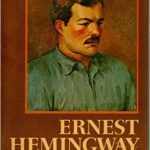 In my Seattle writing courses, I emphasize how studying great writing is an essential part of learning to write. There are many outstanding writers, but Ernest Hemingway serves as an important inspiration for many writers, including myself. There is much to learn from Hemingway: his precision with language, saying the most complicated things in pithy, surprising way; his hypnotic prose rhythms, some of which he borrowed from Gertrude Stein; his utterly unflinching portraits of people, not all of which were particularly flattering but many of which get burned into your memory, for example, the old man and waiters in the story “A Clean, Well-Lighted Place.”

His colorful life played a larger role in his writing. For this reason, I picked up Hemingway: A Life Story by Carlos Baker. It was published in 1969 and gives an encyclopedic account of his life. Sometimes there’s too much detail about his life, but then you can just skip a few pages. Hemingway comes across as a very complex personality, an extremely ambitious young many, driven to excel in whatever he tried, desiring admiration, displaying strength, endurance, hating politicians, intellectuals, and lap dogs. He was both shy and an incredibly braggart. He could be a warm and generous friend but could turn on friends quickly. He was a perpetual student, reading widely, studying nature, becoming an expert on topics like bull fighting, trout fishing and big game hunting.

In my Seattle writing courses, I emphasize the need to show or demonstrate in your writing rather than simply summarizing. Hemingway was a genius at this, working hard to get the details right and true so that a reader could conjure the whole picture in his or her mind. The Baker biography provides much lavish detail about Hemingway’s life. It’s not as luminescent as his own work, but does provide an important background to it.