How to Successfully Publish & Sell Your Memoir

nickPosted on March 2, 2012 Posted in Classes, Writing Techniques — No Comments ↓ 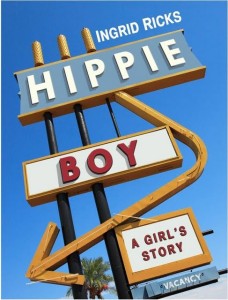 Last summer, I attended the Pacific Northwest Writers Conference in Bellevue where in addition to teaching a class in travel writing, I participated in a discussion with 30 New York agents. I asked the assembled agents the following question.

“How will the digitalization of the book affect your business?”

The question drew a puzzled response. Finally, one of the agents replied, “We just don’t know.”

This is not an acceptable answer. The transformation of the book from a hard copy to a digital copy is remaking the field of publishing. If agents don’t understand this and find a way to capitalize on it for their clients, they will not be in business much longer.

After that conference, I began looking for people who understood where the digital world would take the book. I found such a person in Ingrid Ricks, a former student, who self-published her memoir, Hippie Boy, and quickly grew a large audience for it–without the help of a New York agent or publishing company.

Ingrid agreed to tell her story below. The story ran in the last issue of The Writer’s Workshop newsletter. The newsletter covers the publishing world, writing techniques, writing classes and jobs in the publishing industry; if you’d like to sign up, go to our website, www.thewritersworkshop.net and click on the email newsletter box to sign up.

My memoir-publishing journey started in Nick’s winter memoir writing class in January of 2010.

I’d been working on Hippie Boy: A Girl’s Story for years. Every six months or so, I would open up the computer file, spend a week hammering away at it, and then shove it aside again. But in January, I decided to get serious and Nick’s class was the final push I needed to get to work and get it done.

Over the next five months, I devoted two to three hours a day to my manuscript, and by June, I had what felt like a finished product. I wrote a book proposal, started sending out pitches and soon landed an agent. I thought I had made it until about five minutes into my new agent conversation, when she told me that without a solid platform, I could kiss my publishing chances goodbye.

For a minute I was perplexed. What did she mean by “platform”? Hadn’t she read my book proposal that detailed how I planned to sell it once the publishers did their job and got it out into the universe? I had already launched a book web site and Facebook page. What else did they expect me to do?
“Publishers don’t care about what you say you can do AFTER your book is published,” the agent said quietly. “They want to know who is already lined up to buy your book. I can’t tell you how many great books I’ve represented recently that have been turned down by publishers because the author didn’t have a built-in platform. I don’t want that to happen to you.”

I hung up the phone feeling overwhelmed but determined. I hit the Internet and began researching, and immediately stumbled on Scribd, a social publishing community with tens of millions of monthly visitors. It was August 2010 and I set to work uploading excerpts from my book, reading work from writers I enjoyed and slowly developing a following. Over the next few months I spent time on the site nearly every day, connecting with readers and sharing my work. To expand my base, I also started a story blog and began profiling interesting people who were turning their dreams into reality. And because I needed to keep priming the pump, I began writing essays and discovered I loved the essay format. After a few months, Scribd began featuring my work on their home page, which in turn drove more followers.

My agent started shopping my memoir in early December and attracted the attention of several top publishers. But when their feedback came, it was always the same: Enjoyed the story but the memoir market is saturated and it’s tough selling these types of stories. Good luck and no thanks. After a few of these, I decided that part of the problem was my manuscript. I told my agent to stop shopping it around until I could hire a top editor to evaluate it for me. The editor I wanted was booked five months in advance. That gave me more time to keep pounding away on my platform. I began cross-promoting my excerpts and essays on Smith Magazine and Open Salon, two other open submission platforms, and soon my work was being spotlighted on these Web sites as well.

By June, four of the essays and book excerpts I had published on Open Salon were selected for publication on the parent magazine, Salon, and my exposure soared. When I received my manuscript evaluation back from the editor in late July, I realized that I had a platform and no longer needed a publisher. I said goodbye to my agent, spent six weeks doing nonstop rewrites thanks to the amazing direction I received from the editor, hired a cover designer, proofreader and e-book formatter, and struck out on my own.

I launched my eBook October 1st and in early November, I published my paperback through Lightning Source, a print-on-demand printer with distribution agreements that make it possible for bookstores and libraries to order my book. Because of the platform I had developed, I quickly sold my first hundred eBooks, followed by a hundred or so paperbacks. Then sales stalled and I went to work. I started sending Hippie Boy out to top book reviewers, even though I knew I was shooting for the stars. I began lining up eBook advertising spots on online web sites because I read that all the wildly successful indie authors were advertising. I also reached out to KUOW and pitched my story there. And on December 8th, when Amazon unveiled its new KDP Select Program – which enables indie authors to run free eBook promos to gain exposure – I jumped at the opportunity.

Soon my efforts were paying off. A one-day free eBook promo on Amazon drove more than 4,000 downloads, followed by more than 1100 paid eBook purchases over the following three weeks. In late December, I received an email from Booklist, the official review publication of the American Library Association, saying they had reviewed my book for their February issue. I landed an interview with KUOW and in early January, I was notified that they liked my story so much they were airing three separate stories. I was invited by an English high school teacher to form an author partnership and together, we launched a month-long writing curriculum around Hippie Boy that kicked off January 4th. And on January 6th, I received an email from one of the top literary agents in New York saying she had read and loved Hippie Boy and wondered if I had an agent.

A few months earlier, I would have done ANYTHING to work with this agent. Now, I’m not sure that I want or need a big publisher to acquire my rights and take control over my book. Eventually I hope to partner with an innovative, out-of-the-box thinker who can help me expand my exposure, land a movie deal and secure speaking engagements. For now, though, I’m going to just keep doing what I’m doing. Because it’s working.

If you want to successfully publish and sell your memoir or novel, the secret to success is simple: First seek out the writing instruction you need to hone your writing skills and write a great book. Then hire an editor to help you elevate your manuscript and once rewrites are done, find a top-notch proofreader. From there, it’s all about marketing, marketing, marketing – whether you go the traditional or self-pub route. As part of Nick’s spring memoir writing class, I’ll be stopping by to share my step-by-step process for navigating the new world of publishing, which is where I’m convinced the future of book publishing is at. Hope to see you there.

About the Author – Ingrid Ricks is a Seattle writer and speaker who focuses on overcoming adversity and embracing life. Her stories have been published in Salon, Ladies Home Journal, The Seattle Times and a variety of other publications. Hippie Boy: A Girl’s Story is her first book. Hippie Boy is available as an eBook or paperback on Amazon: www.amazon.com/Hippie-Boy-Girls-Story-ebook/dp/B005RGXNVU