nickPosted on April 24, 2012 Posted in Classes, Wine Making and Wine Writing — No Comments ↓ 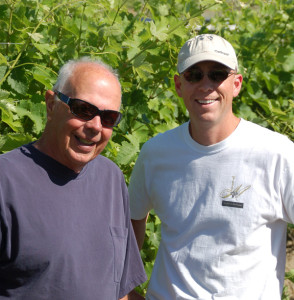 Red Mountain rises above the low, brown sagebrush country outside of Benton City, Washington. Located northwest of the Tri-Cities, Washington’s smallest and most prestigious American Viticulture Area (AVA) looks more like a hill than a mountain, one of a series of rounded basaltic ridges marching southwest along the Yakima River.

The landscape is bare, dry, austere, nothing like the carefully tended gardens of Burgundy or the regal architectural jewel boxes of Bordeaux first growth Chateau Latour. There are no restaurants, hotels or wine trains on Red Mountain, but there likely will be someday. For now, the area is as pure and abstract in its undulating beauty as a landscape in Tuscany.

The road to Red Mountain follows the meanders of the Yakima River. The asphalt climbs past farms and discarded machinery. Unlike the world’s highly developed wine regions, this is still farm country, with an unfinished quality to it. I pass the white chiseled granite sign, Welcome to Red Mountain, the only indication that I’m approaching one of the premier wine growing regions in the world.

Rows of grape vines line the road. Carefully tended clusters of Cabernet, Merlot, and Syrah grapes hang from beneath the vines, reflecting the perfectionism of growers like Ciel du Cheval’s Jim Holmes, whose astonishing fruit reveals the power and elegance of the Red Mountain AVA. Wines made from these vineyards earn stratospheric scores from wine critics. Influential wine critic Robert Parker rates Quilceda Creek Vintners wines from this vineyard among the best in the world.

I turn left and head up the road toward Ciel du Cheval Vineyards to meet owner Jim Holmes, one of the pioneers of Washington State wine. In recent years, the industry has experienced staggering growth, from 155 wineries and 28,000 acres of vines in 2000, to 700 wineries and 40,000 acres today. As the industry explodes with growth and innovation, I sought to understand where it’s headed by talking with him, Red Willow Vineyard owner Mike Sauer, Nefarious Cellars of Chelan, Syncline Winery of the Columbia Gorge, Saviah Cellars of Walla Walla and Woodinville Wine Country, the center of the state’s industry.

Though not a winemaker himself, Holmes sells grapes to some of the best wineries in the state: Betz Family Winery, Andrew Will Winery, Delille Cellars, and McCrea Cellars. Red Mountain specializes in red varietals like Cabernet, Merlot and Syrah. I park the car and greet Holmes, a sturdy man wearing jeans, a jean jacket and a baseball cap.

“Making great wine is like painting a great picture: you have to have some idea of what you want to paint before you put paint to canvas,” he says, indicating the vine rows. “We’ve got a great site – we’ve got great paint! If you want to make a great bottle of wine, you’ve got to think about what you’re doing in the field. You’ve got to know why you did this, and why you did that, and why one worked and the other didn’t work. You’ve got to keep working at those things because the desire is to put great art on the canvas. “

At 75, Holmes still enjoys the challenge. A systems engineer who grew up in the Bay Area north of San Francisco, he developed an early taste for wine. When he moved up the Tri Cities area in 1958 to work for Hanford, he wanted to drink some decent local wine. So he and partner John Williams eventually bought 80 acres of land on Red Mountain. A short time later, Washington State University professor Walter Clore released his ground-breaking report on Washington wine in 1972. It made the case for growing vinifera grapes in Washington. The rest is history.

“It was a great report,” Holmes says. “He’d done 20 years of research. It turned out to be the start of the whole thing.”

Clore’s data convinced Holmes that growing wine grapes was worth doing, but it wasn’t a sure thing. “It was a high level risk,” he says. “Anyone who planted grapes on Red Mountain back then could qualify as crazy.”

For the rest of the story, read the June issue of Alaska Airlines Magazine. For more on writing classes, please visit www.thewritersworkshop.net.