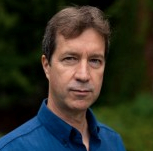 Rich Read wanted to tell a story. He’d visited southeast Asia and saw an immense economic crisis unfolding. But how to make that interesting to a general reader of the Oregonian where he worked as a reporter?

“I didn’t want to write an economic treatise because no one would read it,” he said when he spoke to my fall writing class for The Writer’s Workshop. “I wanted to find a product from the Northwest, sold to the middle class, and follow it. I started casting around and came up with idea of French fry which is a multi-billion dollar industry. The russet Burbank potato is perfect for fast food French fries. It was a crazy idea for a regional newspaper.”

The proposal was denied, so he retooled it and sent it again. Denied. Then managing editor Therese Bottomly got wind of it. “I love this story,” she said. “We’ve got to do it.”

Rich was assigned to work with editor Jack Hart, a specialist in narrative writing, and author of Storycraft which I use in my writing courses for The Writer’s Workshop.

“What are you trying to do?” Jack said.

“I want to follow the river of French fries,” Rich explained.

“You want one container to give it drama and specificity,” Jack said. “You need to find one container and follow it around the world.”

Rich took Jack’s advice, found such a container, and wrote a terrific story about French Fries and the global supply chain.

“Writing is always harder than the reporting,” he said. “This was my first try at narrative writing. Jack Hart walked me through how to do it. We chose John McPhee as a model because he’s such a great explanatory writer. Each scene would have a point.”

It ended up being a multipart series and got a great reaction. When Rich returned to the office, there was a bouquet of flowers on the desk and a note, “You’re a finalist for the Pulitzer.”

On day of the awards, the editorial staff gathered in the newsroom to hear he’d won it. “They wheeled in crates of MacDonald’s French fries and champagne,” he says. “It was really great for the paper.”

Richard Read is a freelance reporter based in Seattle, where he was a national reporter and bureau chief for the Los Angeles Times from 2019 to 2021. A two-time Pulitzer Prize winner, he was a senior writer and foreign correspondent for The Oregonian, working for the Portland, Oregon newspaper from 1981 to 1986 and 1989 until 2016.