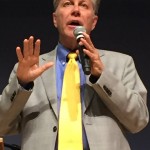 In this summer’s Seattle Writing Class, “Writing for Story,” we’ll learn how to read in public as a writer. This is a necessary skill for anyone who wishes to promote a book or read in public.

I was reminded of the importance of this when attending the recent reading by Dana Gioia, who received Image Magazine’s Thirteenth Annual Denise Levertov award. Gioia is not only an internationally acclaimed poet, but is one of the best contemporary readers of poetry around. He gave lyrical, dramatic interpretations of his and other people’s poems, all from memory. When I asked him about how Wallace Stevens had influenced his poetry, he said Stevens was an influence, though perhaps not as important a one as Shakespeare or Robert Frost. He then recited from memory Steven’s poem, “Peter Quince at the Clavier.” Are there any contemporary poets who could match that? If so, I have not heard them read.

Gioia’s ability to memorize, recite and perform poetry seems to grow out of his convictions that poetry is a public art, not simply something to be written and read without being spoken. These beliefs helped shape his tenure as head of the NEA, where he did important work in repairing the direction of the agency. In his 1991 essay, “Can Poetry Matter?” he took up this issue, criticizing the way contemporary poetry and writing was taught. The essay appeared in the Atlantic and created quite a sensation. I read the essay while in graduate school. It had an important influence on my own writing, and on the Seattle Writing Classes I eventually taught. Gioia’s understanding of audience and belief that writers need to speak to an audience outside of writing programs convinced me to follow a similar trajectory in my work and teaching. I highly recommend this essay as well as his poems and literary criticism for neophyte writers looking for a thoughtful and helpful model.

3 comments on “Writer as Reader in Seattle Writing Classes”