The Storms of Denali: A Novel by Nicholas O’Connell 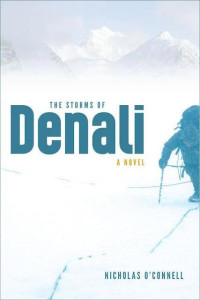 Soaring 20,320 feet into the thin Arctic air, Denali is the highest and coldest summit in North America and one of the most coveted mountaineering prizes on the planet. In this novel of adventure, adversity, and ambition by renowned mountaineer and writer Nicholas O’Connell, four men set out to conquer it. Among the sharply drawn team members is narrator John Walker, a family man torn between domestic stability and mountaineering’s dangerous, alluring glory. In the course of their ascent the group battles avalanches, fierce winds, and mind-numbing cold before it splinters, leading inexorably to tragedy.

Throughout the book, the author’s first-hand experience lends vivid reality to the formidable challenges of the mountain and to the bonds formed and broken in the pursuit of its summit. Beyond the physical tolls, O’Connell dramatizes the team’s intense, high-stakes debate about the riskiness of the climb, made all the more treacherous by taking place at the extreme northern pole of the planet.

To purchase: Go to IndieBound.org or click on the photo to buy from Amazon.com.

Reviews of The Storms of Denali

While I enjoy classic mountain-climbing films such as Cliffhanger, The Eiger Sanction and K2, they aren’t my passion. As a genre they seem overly predictable: think allegory, think macho rivalry, think cold and suffering, think survival. Indeed, all these elements are present in Nicholas O’Connell’s engrossing first novel, The Storms of Denali (University of Alaska Press), about climbing North America’s highest peak (in Alaska), yet O’Connell’s telling is downright Conradian. I think, in particular, of Joseph Conrad’s seafaring novel Typhoon—but also of Conrad’s dictum that the writer’s first responsibility is to make the reader “see.”

This book is a page turner. Nick O’Connell clearly knows a great deal about mountain climbing and how to couple this knowledge with a compelling and gripping narrative. There’s plenty of tension and drama in The Storms of Denali. It will be entertaining and engaging for readers even if they don’t know much about climbing.

The Storms of Denali will be a great study for those who wish to climb high and a thriller for the “armchair mountaineer.”

—Lou Whittaker, author of Memoirs of a Mountain Guide and Founder of Rainier Mountaineering, Inc.

A powerful and addictive read, The Storms of Denali will sweep you in like an avalanche on the south face of the mountain herself.  A vividly written tale about a climb up an unforgiving mountain, O’Connell’s novel teaches us what an adventure story is really about–attempting the top is only part of the game; finding one’s way home is what makes the true hero.”

—Garth Stein, author of the bestseller, The Art of Racing in the Rain.

Nick O’ Connell has portrayed the risks, joys, emotions, and hard labor experienced during the ascent of North America’s most frigid mountain. In his novel he displays a full comprehension of these varying experiences and dangers that may be encountered in surviving Denali.

—Fred Beckey, a legend in climbing circles, has made more first ascents in North America than anyone else. He’s the author of Fred Beckey’s 100 Favorite North American Climbs.

The Storms of Denali is a genuinely engaging novel with not only the suspense and superb pacing we expect from a good adventure story but vividly drawn characters and a fascinating, detailed portrait of the culture of mountain climbers as well. Nick O’Connell’s first novel is both a thrilling ride and danged satisfying read.”

—Charles Johnson is the author of the National Book Award-winning novel, Middle Passage.

An extraordinary novel. Through verisimilitude and candor rarely found in the nonfiction literature of North America’s highest peak, O’Connell plumbs the motivations, risk, and nuances of an ordinary climber’s life.  The mounting tension, deft characterizations, and sun-burnt realism of The Storms of Denali transport the reader more vividly than any other book about the mountain.

—Jonathan Waterman, author of In the Shadow of Denali and Running Dry.

Nick O’Connell has crafted a remarkable story of risk, death and survival on Denali, the coldest big mountain in the world.  Every reader – climber or not – should find this account of a difficult and dangerous ascent both absorbing and mesmerizing.   There is a short list of memorable works of fiction about climbing.  The Storms of Denali deserves to be among them.

—Jim Wickwire was one of first two Americans to summit K2 and co-author of the memoir, Addicted to Danger.

ON SACRED GROUND: THE SPIRIT OF PLACE IN PACIFIC NORTHWEST LITERATURE 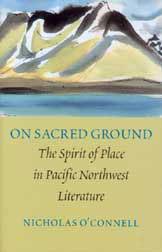 On Sacred Ground: The Spirit of Place in Pacific Northwest Literature (University of Washington Press, Fall, 2003) traces the history of Northwest literature, from the rich trove of Native American myths, to the diaries and accounts of explorers and settlers, to the effusive outpourings of the Romantic writers, the sharply etched stories of Realistic writers, to the mystic visions of the Northwest School of poets, to the contemporary explosion of Northwest poetry and prose. In tracing this history, I focus on the relation between humans and the environment and explore how that relationship has evolved, from the Native peoples’ sense of the land’s animistic qualities, to early writers’ emphasis on making a living from the country, to contemporary authors’ attempts to recover a sense of the landscape’s spiritual qualities.

From the beginning, the region’s writers and storytellers made the landscape the dominant subject of Northwest literature. They sought to understand their relationship with the nonhuman world and express it in their work. But the land did not reveal itself easily or immediately. Writers had to wrestle to come to terms with it, raising a number of questions: What is distinctive about this place? How does the literature reflect it? What is Northwest literature? How is it unique? Is there a Northwest style? How does the work of individual authors follow or depart from this style? In exploring these and other issues, I relate the larger story of how the region’s authors struggled to see the Northwest not just as a source of material wealth but as a spiritual homeland, a place to lead a rich and fulfilling life within the context of the rest of creation.

“As a reader, I’m grateful to O’Connell for amassing his material and presenting it in thought-provoking fashion, and as a teacher, I’m happy to have a book such as this as a starting place for discussing Northwest literature with students. On Sacred Ground is of value to anyone interested in the on-going attempt to define and articulate our region’s literature.”

AT THE FIELD’S END: INTERVIEWS WITH 22 PACIFIC NORTHWEST WRITERS 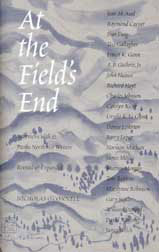 Nicholas O’Connell’s interviews are of that most delectable variety: so casual they could be taking place at the adjoining coffeehouse table, and yet so engaging that it’d be a shame if the espresso machine kicked in at an inopportune moment and obscured one’s ability to eavesdrop. At the Field’s End was originally published in 1987; this edition adds a new preface, updated biographical information, and interviews with Denise Levertov and John Haines. O’Connell is interested in regional identity, and “stories,” he says, “represent one of the strongest elements of regional identity.” While each of these interviews covers very different literary territory–how couldn’t they, with the likes of Raymond Carver, Ivan Doig, Charles Johnson, Ursula K. Le Guin, Levertov, and Tom Robbins as their subjects?–it is amazing how much a place can govern its writers and its literature. For many of the writers O’Connell speaks with, landscape is no mere backdrop, in life or work. “It wants me here,” says Tess Gallagher of the place she calls home; “I have to obey.” “Landscape,” says James Welch, “is almost the main character in anything I write.” It is the rain that appeals to Robbins, as “It allows for prolonged periods of intimacy…. It keeps you inside where you can turn inward.” Gary Snyder feels an affinity more for a particular spot than for the region or its weather. “Every person,” he says, “should be the product of a specific place, like a coho salmon or a rhododendron bush.”

BEYOND RISK: CONVERSATIONS WITH CLIMBERS 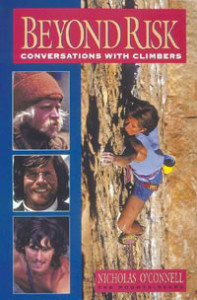 The world’s most visionary and influential mountaineers didn’t set out to become so; only inadvertently did they become definers of technique, style and achievement. These in-depth interviews with seventeen such climbers illuminate their immensely personal approaches to and motivations for climbing. Despite different life histories, generations and nationalities, pioneers like Tomo Cesen, Walter Bonatti, Reinhold Messner, and Catherine Destivelle share a commitment to the challenge of their calling. Their reflections on climbing unearth a range of opinions on ethics, motivations, fellow climbers, and the future of mountaineers, but also reveal the experiences of success, disappointment, fear and death common to all. Beyond Risk was published in 1993 by the Mountaineers in the United States and Canada. Editions then followed in England, Italy, Poland, the Czech Republic and Japan.

O’Connell’s interviews have enlightened me again to the fact that great climbers have one thing in common; they believe in themselves and follow their dreams.

Traveling far and wide to interview his subjects, the author has let them speak their minds without indulging in his own personal interpretations. The result is a collection of casual, honest self-portraits. With O’Connell’s prodding, the climbers reveal themselves with greater frankness than might have resulted from a formal magazine profile.

O’Connell asks very accurately aimed questions. It all adds up to a fascinating testimony of the progression of mountaineering in our time.

The best collection of interviews of climbers I have ever read. If you want to understand why climbers climb, read this book. Whenever a non-climber asks why I climb, I’ve never felt like I gave an adequate answer. Now I can. These climbers each in their own way described why they climb. I found my answers about myself in that book. A must read for any climber and a good read for anyone interested in a climber’s mindset

–A reader from Spring House, PA from Amazon.com.