↓ Skip to Main Content
Home › About Us › Student Success

I’ve had the privilege of teaching a number of wonderful and gifted students in my Seattle writing classes and in my online courses. Many of them have gone on to publish books and stories in national newspapers and magazines, including Newsweek, Men’s Journal, Ladies Home Journal, Mother Jones, Sierra, The Wall Street Journal and many other places. I’ve included some recent examples of their work below.

Too Close for Comfort 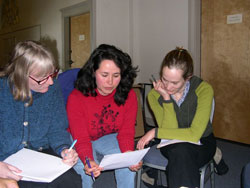 I spotted him at the checkout counters, bagging at No. 14. His arms juddered as he placed a carton of eggs into a plastic sack. His bottom lip was slick with saliva. He wore a yellow plastic name tag upon which he had scrawled ”Jerry” in kindergarten penmanship. He was middle-aged, like my brothers, David and Chris, and my sister, Diane. They have similar difficulties with motor skills and coordination, but they can’t write their names. My siblings are affected by fragile X syndrome, a condition that causes their mental retardation and makes them hypersensitive to sounds and touch. I spent my childhood drawing them out of their shyness and helping them communicate with others. I couldn’t guess Jerry’s condition, but his mental age must have been about 12.

Ever since I smiled at him the first time he bagged my groceries at my local supermarket, Jerry has followed me around like an adoring fan. He leaned into me as he pointed out the reddest Roma tomatoes, bumped me to find the freshest skim milk and stepped on my foot when he reached for the graham crackers on the top shelf. His lack of boundaries made me uncomfortable. I didn’t know how to deflect his attention. I didn’t want to speak to the manager — my complaint could get him fired. So I started avoiding him.

I can still remember the bewilderment and hurt I felt when I was 10 and our neighbor Mrs. Ward didn’t respond when I said hello with David and Diane in tow. Instead, she scurried out of the market, leaving me holding my brother and sister’s hands amid the cantaloupe. I realized in that moment that I hated Mrs. Ward’s guts. Why, then, years later, was I acting as she had?…

A French Repast Dad Would Have Loved

Out of the Woods: How one woman found the perfect horse in an unlikely place.

Even the road gave me pause. I knew I wasn’t far from the urban hum of Baltimore, but I felt like I was driving through a tunnel toward another world. The asphalt surface seemed sunken like a dried up riverbed, hemmed in on both sides by tangles of tree roots protruding from eroding banks. I was filled with an ominous feeling that the trees towering overhead might at any minute come crashing down–another roadblock in my search for the right horse…

The Chinese government’s recognition of the need for public input in solving the environmental crisis may offer a test for greater public participation in other areas.

Mother and daughter encounter everything from Hippos to Hornbills on the Okavango Delta in Botswana, Africa.

Finally Tough Enough to Give Up Snuff

The brown stains on my teeth and the black and blue discoloration of my gums were signs that my affair with chewing tobacco had turned ugly. All that was left in the wake of our frequent rendezvous were empty snuff cans and a trail of putrid spit. The inside of my mouth had become so sore that almost as quickly as I put in a pinch, a pain would tell me to take it out. As soon as I did, I would start obsessing about not having a chew in my mouth…

Martin Hayes – Lord of the Fiddle

Despite the hummingbird pace of his right hand, Martin Hayes demeanor remains unchanged, each move of his bow surprisingly calculated and controlled, as if time has slowed for him. As he says, It is just happening, and you are just observing it.

Hayes attains that rare moment, when he surrenders himself to the magic of the music. As this spell reaches his audience, bodies break free and tap enthusiastically. Hayes bow skates violently yet gracefully across the fiddle strings.

The winner of six All-Ireland championships, Hayes, a native of Ireland who has resided in Seattle since 1993, has won international acclaim for his approach to traditional Irish music. He is recognized for cracking open the tradition-bound shells of the past and exposing the core of Irish music to unique outside influences, from jazz great Miles Davis to classical Bach. Certainly not the sort of stuff you’ll hear played on your favorite local top-40 station, thus his relatively low name recognition among non-Irish music fans…

A Summer Vacation and so much more

As my son Josh and I shot the rapids down Utah’s Green River last summer, wedged in by canyons of gently sloping stone terraces, home could not have seemed farther away. We were paddling through the tempestuous Disaster Falls, the wreckage site of the No Name, one of Maj. John Wesley Powell’s boats on his 1869 expedition down the Green and Colorado rivers to the foot of the Grand Canyon. Happily, our boat met with more success than Powell’s. We whipped through holes between the rocks masterfully, reveling in the adrenaline rush and the cooling spray of the white water. The sandstone and quartz above us in sun-bleached hues of peach and gray were dotted with the deep greens of Douglas firs and sagebrush. Bighorn sheep families grazed nearby, with no apparent fear of the river invaders. We were on a four-day, guided white-water rafting trip. Josh and I had long talked of taking such a trip. Josh’s younger brother, Zach–a landlubber through and through–never shared our enthusiasm. Our group of 18 included several children besides 13-year-old Josh, but 10-year-old Zach was not among them. Sadly, Zach had died two months earlier, after battling cancer for more than three years. As Josh and I struggled separately to deal with the void left in our lives, I decided the time was right for our river trip. I hoped it would be an opportunity for bonding, and also just plain fun….

The Riviera Times
By Mary Mascarella

For the first time in its history, the 12th century castle of Villeneuve-Loubet has lowered its drawbridge to let in guided tours. The fortress-style castle and surrounding property have always been privately owned – the Counts of Provence held it for a time and since the 18th century it belongs to the Marquis de Panisse-Passis and his family. Last year the elderly Marquis Henri passed away and his son Jacques, the new Marquis, was persuaded to let admirers see the castle up close. With much pleasure I recently took the guided tour organized by the Office of Tourism. The 1 1/2 hour tour is conducted twice a week and begins at the lower gate of the outer ring wall. We then toured 10 lush hectares of gardens that separate the castle from the village below…