nickPosted on May 7, 2017 Posted in Classes, Writing Techniques — No Comments ↓ 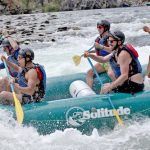 In my summer Seattle writing class, we’ll discuss In Medias Res openings, one of the most effective ways of opening a story. To write in medias res, you’ll need a strong scene from the middle of your story. Pick the most vivid and dramatic moment in the story, for example, when the canoe is about to go over the falls, or the killer is making his last stand, or the argument is reaching its climax. You’re looking, in other words, for a scene that has conflict and drama. These qualities are essential to any in medias res scene, because they will bring the readers quickly into the story.

After finding the scene, divide it in half. Use the first half of the scene in the lead and save the second half of it for right near the end of the story. By dividing it in half, you’ll create suspense within your story. The reader will get hooked on the first half of the scene and then read to the end of the story to see what happens. In the process, readers will finish the rest of story.

After putting first half of scene in lead, make transition to actual start of story. For example, tell how you came to make a rafting trip down the Salmon River. Readers will follow this discussion because it will reveal whether you survived going over the falls. From time to time, foreshadow the falls and give the reader hints about what is going to happen.

Once you’ve reached the point where the second half of scene occurs, insert it without repeating the opening scene. Just use summary or a repeated detail to remind the reader of what happened at the start of the story. Then go through second half of scene. End with a conclusion that makes sense of the trip and gives the reader a sense of what you learned from it.